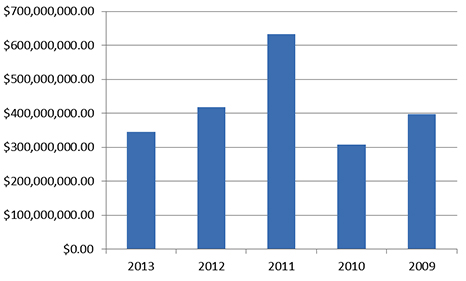 Real estate sales figures for the first six months of 2013 have taken a huge jump due to unusually high May figures resulting from the sale of the Ritz--Carlton. The other months of the 1st and 2nd quarters are on a par with the activity seen in 2012, both in sales dollars and in number of transactions. 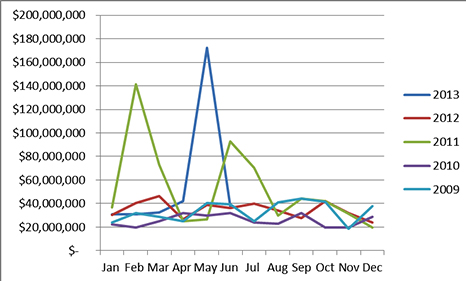 The monthly average number of property transactions for 1st and 2nd quarter 2013 totals 848, including the anomaly month of May which had 169 transactions. The monthly average without the May figure is 139, which is right in line with 2012 (141) and 2011 (142). Looking back to 2009, which had higher transaction numbers (170 per month), this means that the average price per transaction is rising, a good sign that political and economic changes both locally and abroad are not affecting the upper end of the market.

When accounting for the skewed figures caused by the Ritz-­?Carlton sale, real estate activity is shaping up in 2013 to be similar to figures in 2012. Lack of growth in the market is not unreasonable for the first six months due to business interests waiting to see the results of the elections held in May. With the new government in place and beginning to declare its economic and political intentions, the real estate market may well see an increase in the next six months to the end of 2013.

The new government elected in May has announced that it is committed to the cruise port project and redevelopment of the airport, both of which will strengthen Cayman’s tourism products. Although the timeline is still uncertain, methodical steps are being taken to initiate the port project.

The Health City Cayman Islands project is under construction and inventory in East End has increased in anticipation of collateral commercial and residential development in that district.

Tourism figures for 2013 have been encouraging, revealing growth in this vitally important sector. March figures for air arrivals were the highest since 2000, an indication that overseas visitors are feeling increased confidence in the slow but steady worldwide economic recovery. While cruise ship figures were down, Cayman continues to post strong tourism figures compared to the rest of the Caribbean region and experienced the biggest increase in stayover tourist arrivals among 12 regional jurisdictions for 1st quarter 2013.

Cayman continues to rank highly in the world’s luxury property markets. In the Knight Frank 2013 Wealth Report the Cayman Islands ranks 54th in the top 80 wealthiest locations for luxury real estate. Cayman also features in the report’s list of top 10 markets in demand, based on web searches for prime real estate.