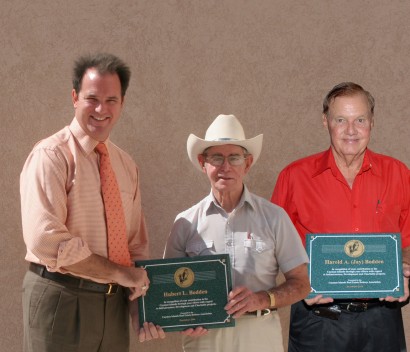 The Cayman Islands Real Estate Brokers Association, (CIREBA) recently named Mr. Harold "Jay" Bodden and Mr. Hubert Bodden, as their 2006 Honorees. Known by locals and residents alike as, "Jay" and "Hubert", these two Caymanian brothers have been pillars of the community for many years.

Each of them have been serving our community in the Private Sector for over 55 years. Both individuals had large land holdings which they have used for development purposes. Hubert has been an island fixture first in heavy equipment and later in the paving business. Jay has dredged and developed hundreds of acres on the North Sound at the end of Sparky Drive and created the Islands first Industrial Park.

JC Calhoun, of Coldwell Banker Cayman Islands Realty and a board member for CIREBA presented the awards and stated comically, "Both are really like big kids who never got tired of playing with big trucks." Mr. Calhoun's presentation speech also described the two brothers affectionately as "Old School Caymanians"... "People who had pride in their work, pride in producing the best product they could and selling it for a fair price."

CIREBA President, James Bovell further explained, "There are few areas in Cayman, especially near their beloved Savannah, that have not been touched by the generosity of Hubert and Jay Bodden. Both men have served on many Government and voluntary Boards, they’ve been honored by service clubs, the National Trust and have been recipients of the Certificate and Badge of Honor from the Queen."