The past years have seen Cayman experiencing the effects of recession but towards the end of 2015 activity began to increase particularly with water-front properties. This trend has continued through 2016 which is indicating that the market is strengthening and things overall are looking up. House prices are rising, there are new developments across the Island and there is a sense of increased investor confidence.

Below is a look at CIREBA’s active listings for 2016 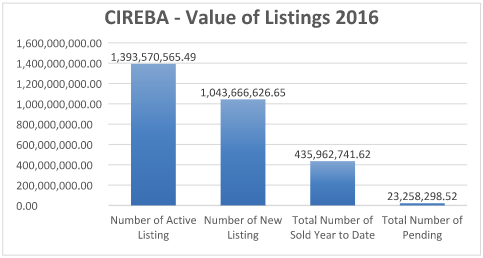 The overall Real Estate sales figures for 2016 are comparable with 2015. The water front market appears to be improving at a faster rate than other segments of the market with growth centered around Seven Mile Beach condominiums.
This coupled with strong demand and limited supply are resulting in a shift towards a seller’s market which suggests that 2017 may see availability being a bigger issue than pricing. There is also increased popularity in canal-front homes partly as they are more affordable than ocean properties but still offer buyers outstanding views and waterfront locations.

Below show listings that went off market in 2016

Across the island there is new and continued development and evidence of economic growth with the National Statistics office reporting a 3% Growth in the first half of 2016. http://www.eso.ky

With large scale projects like the expansion of Owen Roberts International Airport which will provide better access for long-haul flights and overall superior services it seems that economic growth should continue for the foreseeable future.

Other major infrastructure improvements include the construction of transportation links and two new underpasses on West Bay Road and the Esterley Tibbetts Highway. Plus, the expansion of the bypass to a four-lane highway which are vital projects aimed at relieving traffic congestion for those traveling to and from West Bay.

The Cayman Enterprise City has purchased land near George Town for its permeant location. Here an 850,000 Square foot Economic Zones Campus will be constructed. Other big developments include the expansion of Camana Bay and Health City in the East end.

In South Sound, there are several large developments including the Vela, currently in the first phase of constructing a 168-unit complex which is already sold out. Plus, the Tides project which will comprise of 24 energy-efficient ocean front condos.

Looking further, in Frank Sound the Ironwood development is set to be a major addition and asset providing new shops, cinema and various types of accommodations for tourists and those in the Eastern Districts.

2016 also saw the opening of the Kimpton Seafire Hotel & Resort on Seven Mile Beach which represents the first major hotel opening in the last ten years.

The outlook for the market still looks positive for the 2017 and onwards. The rental market is growing along with the population of the islands. Cayman tourism is doing well with both stay over and Cruise tourism numbers remaining steady in addition to development across the Island.

“I believe that when you look at how things are trending in Cayman on a macro level - taking things such as real estate sales, public & civic development, improvements to infrastructure and the favorable laws in this country with respect to taxation and private business - you see the Cayman Islands continuing to grow, prosper and move in a positive direction with respect to future growth and economic stability."

It is also important to consider outside influences on the Cayman economy such as the recent events in the US elections and UK Brexit. How these may affect the picture in Cayman is yet to be seen. However, for the moment it seems that Cayman is in a great position and can look forward with renewed confidence.